Create an Account - Increase your productivity, customize your experience, and engage in information you care about.

History of the Park

Born Under a Lucky Star

It’s 2003. Blue Hole – a beloved but rundown, privately-owned swimming spot – is up for sale. A developer has already drawn plans to shoehorn a giant 350-home subdivision around it and build a private tourist lodge dominating the iconic swimming hole area. It will change Wimberley – forever – into a much different kind of town.

Only a miracle could prevent it. A miracle is what we got.

All history provided by the Friends of Blue Hole. 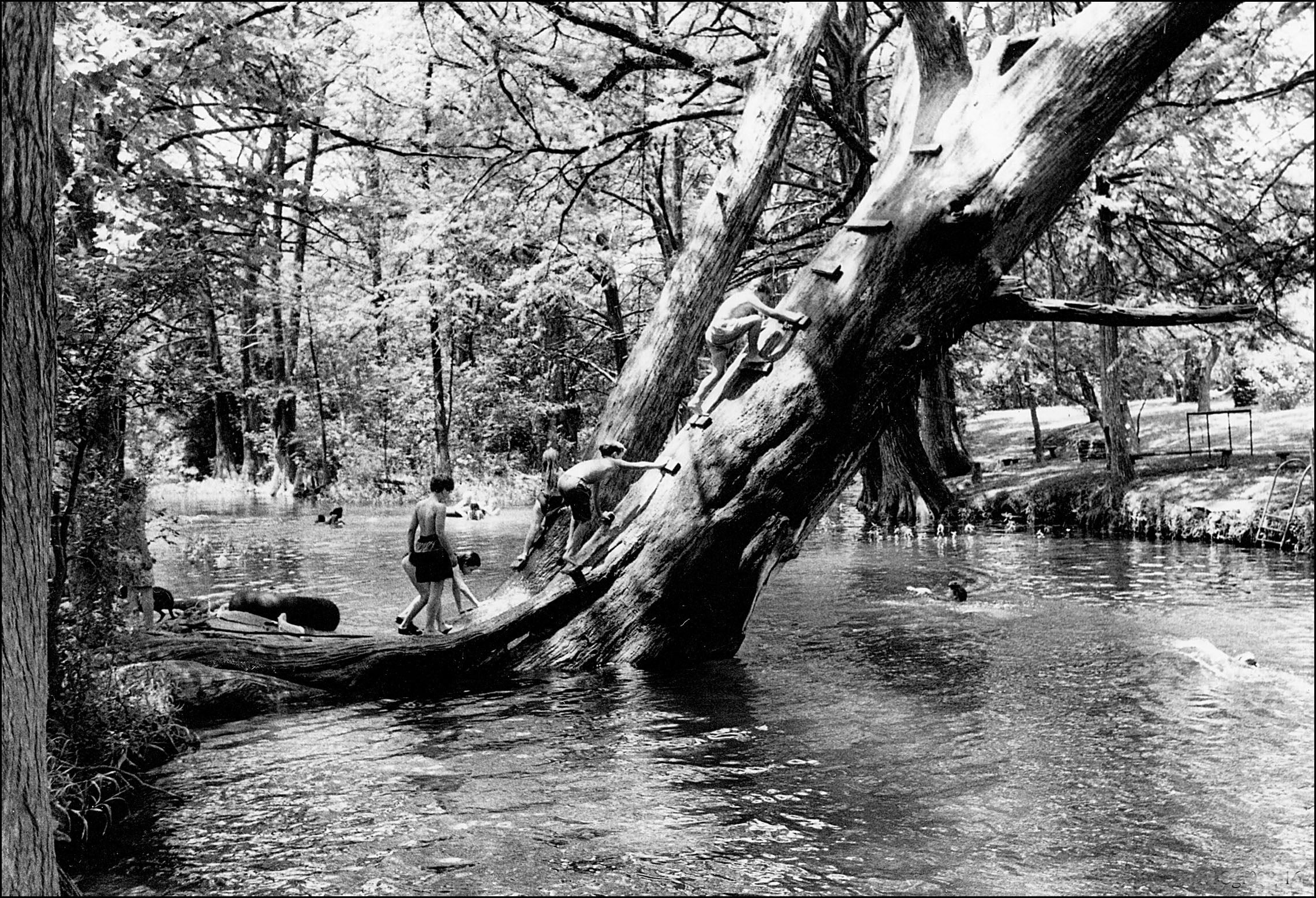 In the mid-70s the property was purchased by private partnerships that created the Blue Hole Recreation Club which allowed swimming and camping. Thousands of people would visit the quaint village of Wimberley just to swim in the Blue Hole. 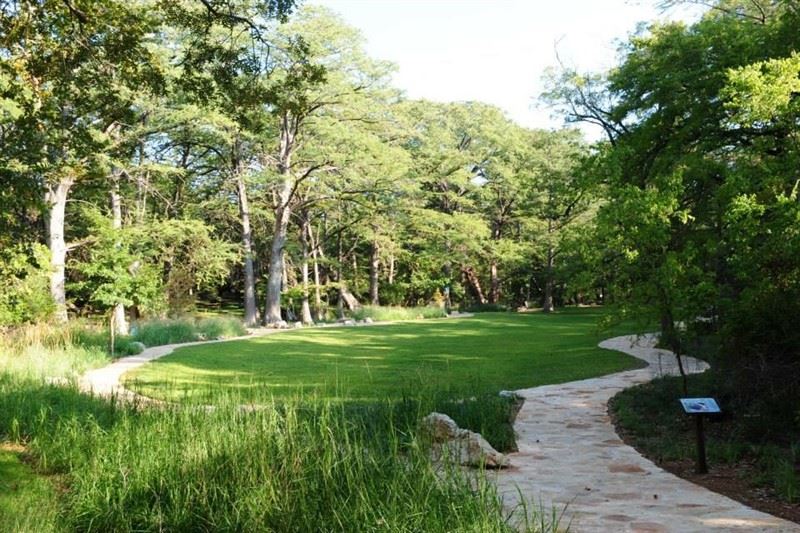 In 16 months, April 2005, the Village pays Peter Way in full and ahead of schedule. The park (all 126 acres) belongs to Wimberley. Peter is officially amazed!

Friends of Blue Hole is founded as a 501(c)(3) nonprofit organization dedicated solely to supporting the Blue Hole Regional Park. 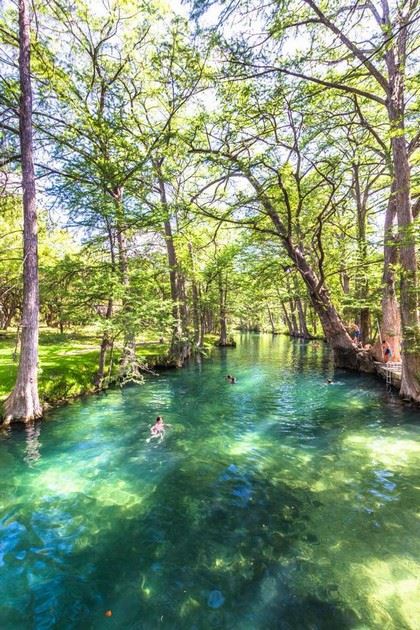 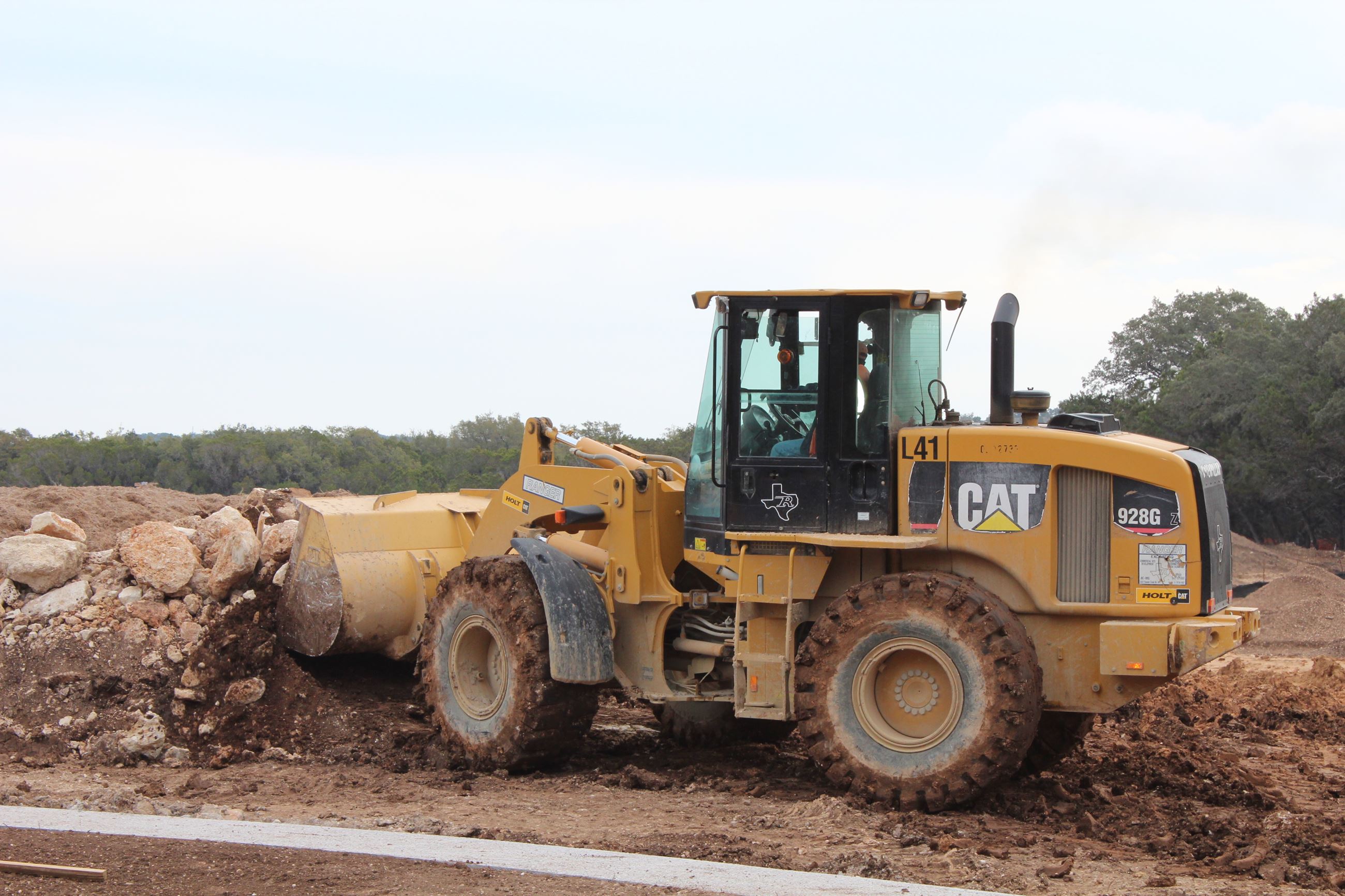 The design of the Park is complete in about a year and is accepted by the City.

TF Harper is tapped in November for the long-awaited construction.

Blue Hole Regional Park is chosen as one of 25 pilot projects in the world by the Sustainable Sites Institute. Blue Hole achieved this honor by:

Using cedar and stone harvested from the park itself, which might otherwise have been carted off to a landfill.

Constructing a rainwater system to collect runoff from the main office roof to water landscaping. 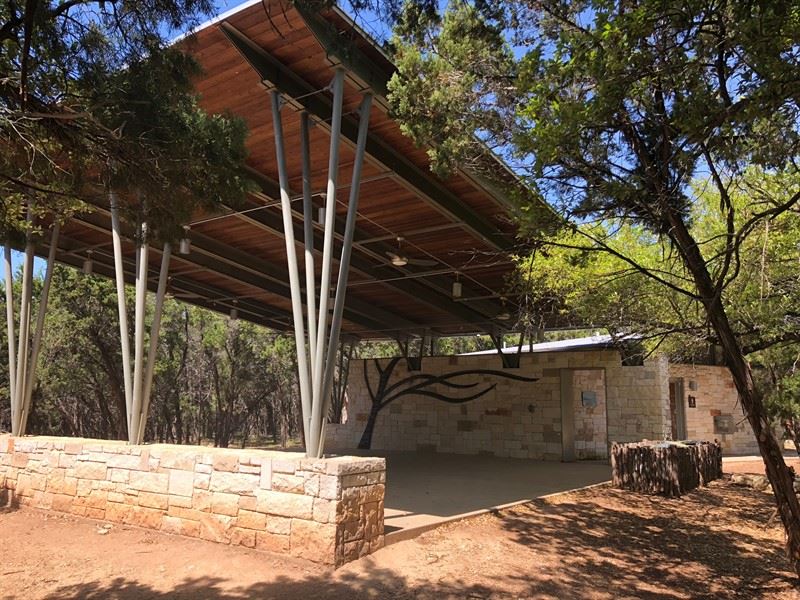 Blue Hole Regional Park has only grown in popularity with over 60,000 visitors visiting the swimming area in a few short months in the summer swim season. In 2016, a reservation system was put in place by the City because the park was being loved to death.

In 2020, the City of Wimberley proposed plans for a nature center to be constructed in the park. This Blue Hole Nature Center would extend our environmental education efforts to thousands of Wimberley Valley residents and provide new and exciting programs and learning opportunities through nature.

Blue Hole is a portion of a larger historic property purchased by John R. Dobie in 1897. The family lived and farmed the 500+ acre property for more than 70 years. Beginning in the 1920s, they allowed fee-based swimming at Blue Hole 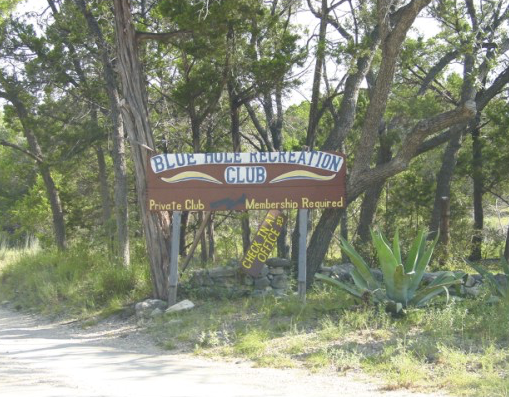 The Blue Hole property is under imminent threat of development – A lodge above the swimming hole with 350 single-family residences on the Blue Hole acreage are proposed by an Austin developer.

Intent on saving this natural, historic resource, new Mayor Steve Klepfer and Councilmember Marilee Wood and her husband Tevis Grinstead approached local resident Peter Way to discuss permanent protection for this true Texas treasure. The single most important event in this great preservation story happened during that meeting: Peter Way, speaking on behalf of his entire family, simply said “We’ll do it!” opening the door to protect Blue Hole for future generations.

Wimberley, a newly incorporated town with an annual budget of about $400,000 and no ad valorum tax, set out to raise $3.1 million dollars to buy a park, a huge first project for a young town! 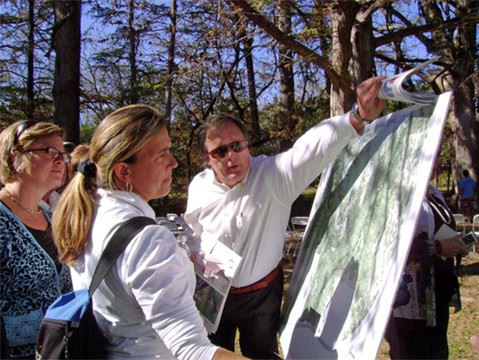 The Lady Bird Johnson Wildflower Center is chosen to develop a Master Plan. Friends of Blue Hole contributed $105,000 of the $115,000 plan cost. An intense planning process takes nearly a year and includes 23 members appointed by the community.

The Master Plan is approved by the City, under the leadership of Mayor Tom Haley and City Administrator Don Ferguson.

The search for a designer begins in late 2008 as the City issued a Request for Proposals for the design of Blue Hole Regional Park. The deadline for submission of proposals was February 12, 2009.

The Design Workshop – Austin (Rebecca Leonard and Steven Spears) is selected in early summer 2009, out of 13 bids. At this time, Design Workshop has also been selected by their peers as the leading Landscape Architecture Firm in the USA in 2008 – what a wonderful start!

Task Force and the Design team hold monthly meetings on the design process. The community participates in a design charrette in October 2009, offering suggestions and ideas for inclusion into the emerging plan for the Park. 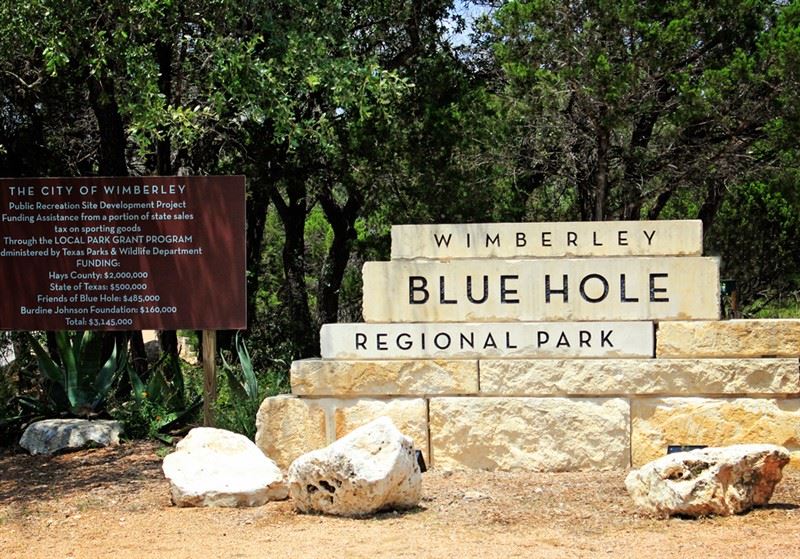 June 2011 – Restoration of the historic swimming area. Grand Opening of Phase I includes the swimming area, paved parking, bathhouses, park office, and picnic area, the Wood/Grinstead Amphitheatre, and the Way Family Overlook, all of which went into immediate use by the park that day. 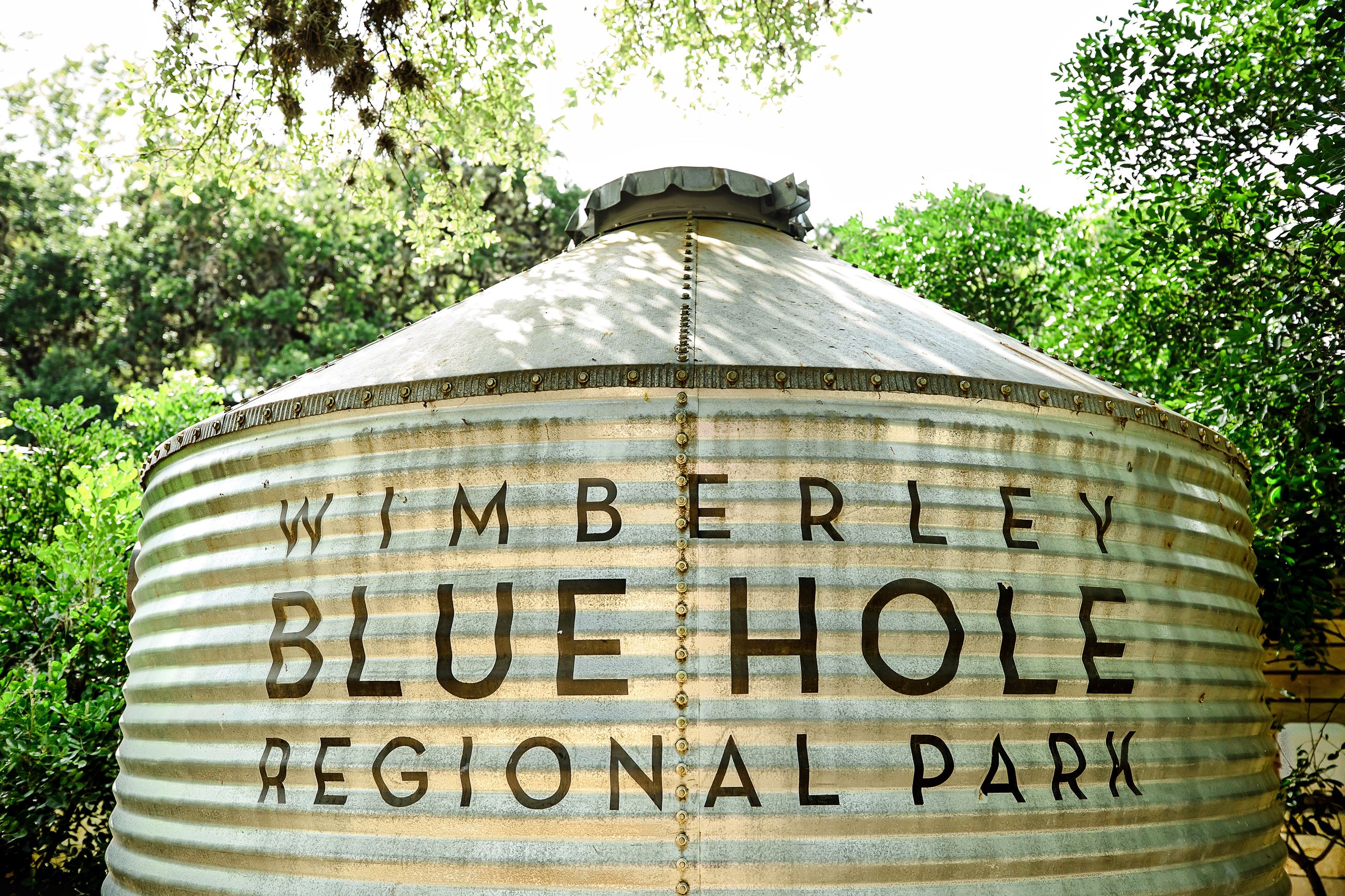